So you hear that one of your Wharton classes entails a group project this semester, and you don’t think about it for more than a moment.

Of course you have group projects with your classes. It is kind of a given seeing as most of your classes at least have an element of group work, right?

At Wharton, we are taught the importance of working in teams and groups from day one. I mean, do you remember your first experience in Management 100? You were given a group from the first day of class and were required to get to know each other and work together with a local non-profit or club. 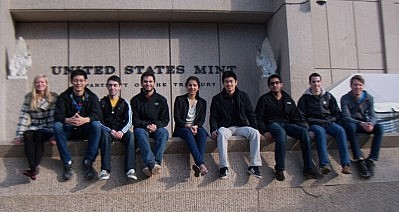 It is something that is normal. Everyone works together and helps each other; that scary-competitive vibe that Wharton gets is manageable since everyone is helping each other!

All of this is to say group work has become the integral fabric in my suit that is being tailored while at Wharton. (For those of you in the Class of 2017 and older, you may get this reference from former Vice Dean Georgette Chapman Phillips; if not, don’t worry and just take it for the beautiful metaphor it is!)

In Organisational Behaviour (yes, it is spelled differently in Australia) on the first day when we saw our syllabus people were shocked that there was a group project that was 40% of our grade. It was a source of worry, of stress and dread, this group project.

For me, I just saw it and moved on. I didn’t think twice about it.

For the first three weeks of class it was stressed that all student MUST attend tutorial on the third week because that was the week we would be assigned our groups.

My thoughts were as follows:

One, “Of course I am going to class,” and two, “Why is everyone seeming like this is such a big deal? It’s just a group project.”

The dreadful day finally came: Thursday Tutorial in Week 3. The day where everyone tried to avoid eye contact and class participation was at a minimum. No one seemed to want to make himself or herself known, as if acting like you weren’t there would mean you wouldn’t have to be assigned a group.

Coming from the outside, I just thought this was awkward. And silly.

Tom, my awesome tutor, waited til the end of class to assign these groups. It was then stated that we had to have a team contract submitted in less than a week!

Now if I thought everyone was crazy, silly, and stressed about merely being assigned a group, I was naïve. The tension in the air grew exponentially as people realized they actually had to WORK with each other!

From the outside, I found this whole exchange laughable. It was later that I asked my group why it seemed that everyone was reacting in this dramatic way to group work.

And every single one of their responses was “We have never worked in teams for a grade before.”

This class is a second year (they only have three years here), second semester class and not a single one of my four other group members had EVER worked in a class group or done a team project! I was baffled.

It made me realize how great Wharton is to show us from early on how practical and important it is to know how to work with others and how crucial collaboration is.

I am blessed to share my experience and knowledge of group work with my fellow Melbournians!

My name is Melanie Smith, I am a senior in Wharton from Bedford, VA. I am a rural Virginian native, a Phildadelphian for the next few years, and was a temporary student in Melbourne, Australia and I love the city! I am concentrating in Management and Marketing and work as a wedding and event planner. A little more random information about me. I have many different loves in my life: Christ, time with family and friends, chocolate, coffee, heels, sunshine, boats, planning events, summer, flower blooms, chick flicks, fresh laundry, the beach, hotels, cooking, photography, receiving letters in the mail, the city, the country, hugs, traveling, and much more! I also have a blog about my love for running and life. Come say hey! http://throughtheeyesofarunner.com/