Exactly one year ago today I was en route to Beijing, about to experience the most formative four months of my young adult life. I had chosen to dedicate one semester of my college career to studying at Peking University’s Guanghua School of Management. I arrived in China’s flourishing capital with the full expectation of gaining an educational and cultural experience. What I didn’t expect was the unforgettable connection I forged with the rest of my international exchange class.

The diversity of my class mirrored the assortment of nationalities in my cohort at Wharton, but we were a relatively small group of students. The common challenge we shared of navigating this foreign landscape bonded us together in a way that transcended the institutional association of a school.

That’s not to say that our academic endeavors weren’t enriching. In class, we engaged in many discussions about global business customs. I especially recall one afternoon lecture regarding professional ethics. The assigned case study told the fictional story of a man who encountered a tempting bribe opportunity, which led to a series of felonies, ranging from arson to slander to prostitution. Every member of the class then had to rank each crime by order of severity. The disparity in responses between the Asian students and the Western students surprised me. For example, the American students identified the act of arson as one of the worst since it is, from a legal and economic perspective, the most damaging. But the Chinese students believed that the arson was in part justified because the perpetrator committed it in defense of a loved one and was trying to avoid a greater evil. The two groups had different foundations for their moral beliefs which translated into how they viewed business and law. That lesson highlighted the importance of understanding cultural values when interpreting a situation.

Outside the Guanghua building, my classmates and I travelled across China to witness both its tremendous modernization and its ancient artifacts. We tasted beer in the old Tsingtao factory, ate savory dim sum in Guangzhou and cruised the legendary West Lake in Hangzhou. When the sun went down, we mingled with other expatriates in the city’s bars and clubs. 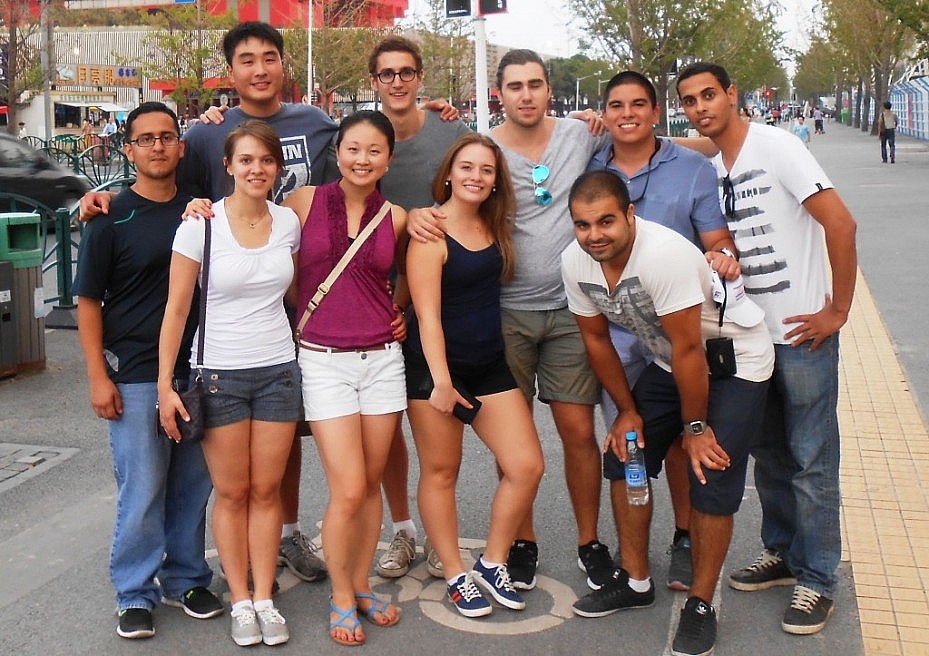 When classes ended in December and it was time for me to return to the States, my heart felt heavy with the realization that I would be saying goodbye to many of these people for good. While I did befriend a handful of Penn students and other Americans, some of my classmates came from Sweden, UAE, and Israel. I would continue my studies at Penn, while they would go back to their home countries to pursue graduate degrees or start families. For a moment in time and space, our paths had crossed but now they would diverge again.

A year later, I’m happy to say that I still keep in touch with a handful of my international exchange class. The experience we shared together that fall established an impervious and lasting bond. With the help of Facebook and the ever-popular Chinese texting app WeChat, I’ve been able to communicate with my friends around the world. And this summer I had the unbelievable opportunity to reunite with two of my classmates in New York City.

Hannah was a local Peking University student whom I met through the program’s buddy system. She came from Taiwan, an island not so far from my hometown of Fuzhou. Hannah was fascinated with American culture, and I was drawn to her outgoing personality. She showed me the life of a Chinese college student, and I told her of my victories and struggles in the pursuit of cultural self-identification – trying to reconcile my Chinese heritage with my American lifestyle. Back in July, Hannah came to New York as part of a fashion marketing summer intensive course. I met her in the East Village one evening for ice cream and as we chatted, I felt as if no time had passed between us.

A few weeks later, my friend Michael came to New York to visit a cousin who lived in Brooklyn. Michael is a commerce student at Queens University in Ontario, Canada. During our semester abroad, I discovered that he and I share the same intellectual curiosity about philosophy and religion. We still have random conversations about zombies and polygamy over online chat.

It’s amazing how globally connected our society is today. While I’m very excited about my educational and professional prospects in the U.S., I long for another opportunity to live abroad and meet people overseas. Nothing can replicate the experience I had as an exchange student in Beijing, but if I can meet just one other person who inspires me and challenges me the way my Fall 2013 class did, the international airfare will be so worthwhile.

Jiyu is a member of the Wharton Undergraduate Class of 2015. She was born in China, but grew up in central Pennsylvania near cow farms and the Hershey Chocolate Factory. She is studying Marketing and Operations & Information Management. After graduation, Jiyu will be in New York at Boston Consulting Group. In the long run, she'd like to work for a nonprofit or foundation related to social justice. At Penn, she is involved with Alternate Spring Break, Civic House, and Sigma Psi Zeta.