As my feet pound the paved earth below me mile after mile, I know I am home. In the past two years, this beautiful city has become my comfort, my friend, and my home.

The boisterous noises of sirens, people shouting to their neighbors, and the rushing masses to and fro are not as lively today. The peace of winter and the cold seems to have calmed this  exciting city, if only for just this morning.

This time of day is magical, as the chill of the dark morning breaks into warmth as the sun peeks over the buildings that tower over me.

These buildings make me feel so small yet so powerful. The power comes from the hope that one day I will have an office in one of these high-rise buildings. One day, I will be the person running to and from work with my briefcase. But for now, as a student, Philadelphia has a way of humbling you.  At least it has humbled me.

Coming into Wharton, I was the big dog: the one person from my small rural town who was going to an Ivy League school, the girl who did everything and whom everyone knew, the smart one, the overachiever.

Getting to Wharton, I was the smallest possible fish: the girl from a small rural town, the girl who wasn’t about to raise her hand and speak in class because she was terrified of being considered dumb, the unsure one, the outsider.

I felt like I was on top of the world when I got into Wharton, but once here, I found myself being challenged in ways that were difficult, wonderful, and often very stressful. I knew I needed to find an outlet for the days my challenges were difficult or too stressful for me to merely study away.

I had always been told, “the four years of college are the best years of your life.” But for me it has been very stressful. It was the spring semester of my freshman year that I decided to embrace the fact that college is not only about classes and learning, but fun and exploration too. So I sought out an outlet to release some of the stresses from the challenges I was facing in classes: I would begin running.

This outlet commenced as just that, an outlet, but has transformed into so much more than that; running has become a passion. Most people run for health or training for a race; for me, I run to explore.

And wow! Exploring Philadelphia has been such a joy and excitement! With miles and miles under my feet and on my sneakers, I have seen countless weddings and historical reenactments in the beautiful district of Old City; run by the Schuylkill river along Boathouse Row as the brave souls brace the 18 degree windy mornings preparing for their crew regattas; experienced many street fairs thrown by local artists or neighborhoods; seen children at play in elementary schools in West Philadelphia; watched as tourists take on the great Rocky Steps; been in the midst of the hustle and bustle of Center City as Market Street employees come back from their lunches; experienced the lively, celebratory atmosphere of South Street as the street performers begin their nightly acts; been shown the homey towns of Mannyunk, East Falls, and Fishtown by residents of these towns; said hello to the animals while passing the Philadelphia Zoo; and on and on.

But the most rewarding result of my explorations is this: I’ve come to the point where I can say “I know this city. This is my city. I belong here. I’m a resident of the city, not just a temporary student in this city.” 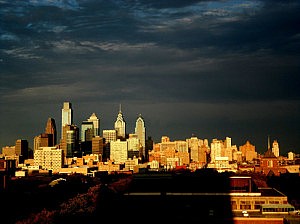 Exploring Philadelphia has been one of the best parts of my time at Wharton and Penn. My fellow students will sometimes tell me they haven’t been off campus all year and I question them, why? Being at Wharton and at the University of Pennsylvania, we are being given the best opportunities a student could have academically, socially, and for our careers. But that is not all we are given. We are given the city. Philadelphia is at our fingertips. We are given wonderful culture, amazing people with unique stories, breathtaking views, and places that are just waiting to be explored.

As my feet pound against the cobblestone brick of Locust Walk, I see Hunstman Hall and my dorm in the distance. As I pass a friend, I take comfort, I am home on this campus and in this city. At least for these four short years…

Here I can be me: I can be Melanie Smith, the small town girl who is finding herself in the City of Brotherly Love.

My name is Melanie Smith, I am a senior in Wharton from Bedford, VA. I am a rural Virginian native, a Phildadelphian for the next few years, and was a temporary student in Melbourne, Australia and I love the city! I am concentrating in Management and Marketing and work as a wedding and event planner. A little more random information about me. I have many different loves in my life: Christ, time with family and friends, chocolate, coffee, heels, sunshine, boats, planning events, summer, flower blooms, chick flicks, fresh laundry, the beach, hotels, cooking, photography, receiving letters in the mail, the city, the country, hugs, traveling, and much more! I also have a blog about my love for running and life. Come say hey! http://throughtheeyesofarunner.com/