Wharton Stories » From Gulf Coast to Ice Coast: It’s Looking Up for This Downhill Skier

From Gulf Coast to Ice Coast: It’s Looking Up for This Downhill Skier

Sarah Stuecheli, W’22, is the face of Wharton in more ways than one. The senior is a Wharton Ambassador, a Disney character, and a skier on Penn’s Ski and Snowboard Team.

Sarah Stuecheli didn’t grow up skiing since there’s not much skiing in Dallas, Texas. She had gone with her family to ski a handful of times out of state.

“By no means was I a good skier at all.” the senior said.

When she arrived at Penn, she went with a few friends to the club fair that’s held during the first week of classes on Locust Walk.

“We walk past this ski table and they’re like, ‘Oh look, that would be really fun. The people behind the table seem really cool.’ So we signed up,” Sarah said of how she joined Penn’s ski and snowboard team.

In the spring, the team takes weekend ski trips, including competing against other universities in the Mid-Atlantic region.

During Sarah’s first year, they went to the Poconos and to New York. The Texan says it was great to get outside of Philly and spend time with upper-level students. Team members are encouraged to compete but don’t have to.

“You can just go and ski and have a fun weekend, and they cover housing and transportation,” Sarah said.

Skiing on the East Coast, nicknamed the Ice Coast by skiers, was an adjustment for Sarah who had only skied in Utah and Colorado before arriving at Penn.

She says her parents were initially confused about their daughter joining the team.

The Texan skied with her family over winter break in Colorado for the first time since joining the ski team four years ago.

“My parents were very surprised,” Sarah said. “They said that the northeast skiing toughened me up and that I was much riskier than I used to be.”

She says she ended up coaching her younger brothers on the trip which was rewarding for her.

The Face of Wharton

Sarah joined the Wharton Ambassadors her first year to pick up technical skills, like public speaking and talking to an audience of 150 strangers.

Wharton Ambassadors are one of the first points of contact for prospective students. They host information sessions, send welcome emails to admitted students, and stay in communication with students, answering questions, from the point they get in until they decide to go here.

The senior says it was one of the only student organizations she applied to upon arriving on campus.

“It’s one of the most unique groups in my opinion because you have this role to be the face of Wharton,” Sarah said. “In order to do that, you need to be representative of everyone who’s in Wharton. We’re not just a group of people that are all finance concentrations or are all from a particular part of the country. We’re from everywhere. We study everything.”

“It’s pretty much the only club I’m still involved with as a senior,” the 22-year-old said. “I love it so much.”

The group had to transition to virtual interactions during the pandemic, and losing face-to-face interactions was pretty tough, she says. Previously, ambassadors would take small groups out for coffee chats and get to know them personally. However, one positive has been a wider reach.

“Now with it being virtual, people all across the world can log on and actually get to meet us,” she said. “It’s definitely been a con in many ways, but we’ve got to meet so many more people than we would have.”

Besides being a face of Wharton, Sarah embodies other personas for a good cause. She volunteers with A Moment of Magic Penn, a community-service club where college students dress up as Disney and Marvel characters and visit children in hospitals.

Sarah was Belle from Disney’s Beauty and the Beast and entertained children in the Hospital of the University of Pennsylvania before the coronavirus pandemic. The club has done a few virtual events but hopes to return in person this year.

“It was so rewarding to be in person with these kids who have terminal illnesses in a hospital. This is their joy, these are the characters that they love,” she said. “Being able to bring them any joy when they’re in such a terrible situation, it was really, really rewarding.”

The Spanish minor was also able to communicate with kids who spoke Spanish.

“That was pretty cool for me as an opportunity to use that skill,” Sarah said.

Being from Dallas, Sarah was exposed to Spanish from an early age and started studying it in high school. After going to Spain with her high school, she knew she wanted to minor in it at Penn.

The Texan says she loves her Spanish classes because they are not grammar classes. She has taken a film class and a food class in Spanish.

This semester, it’s an Academically Based Community Service Course.

“We’re actually going into a charter school inside our city and tutoring in Spanish and English. So, I’m really excited for that,” she said.

Post-graduation, Sarah will be consulting at Ernst & Young in New York and hopes Spanish will be part of her career path. 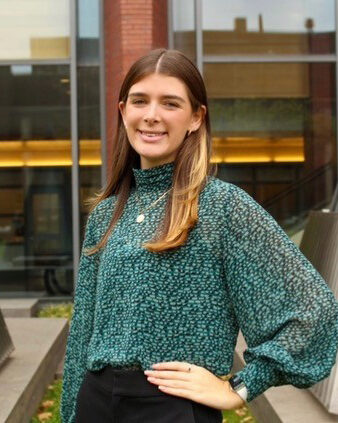 Favorite Wharton or Penn tradition and why

My favorite Penn tradition so far has been Hey Day, which is a tradition for juniors on campus where we walk down Locust with hats and canes and are officially inaugurated as “seniors.” It was amazing to see all of my classmates and celebrate our accomplishments over the past three years. 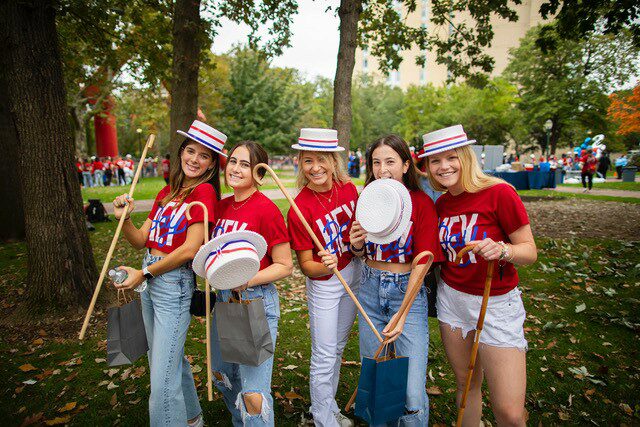 Describe your Wharton/Penn experience so far in six words or less.