Huntsman Program student Jonathan Lahdo, C’20, W’20, grew up in Dubai, UAE, to Syrian and Lebanese parents. At Wharton and Penn, he’s not only gaining the business and language skills to make a difference after graduation, but he’s also involved in student and community organizations to make a difference now.

When applying to Penn, one of the main goals I had, and still have, was to use my education here to create positive change in the Middle East, the region that I come from, and to help solve the many problems it faces.

Being half-Syrian half-Lebanese, not only do I have a deeply personal connection to the Syrian refugee crisis in many ways, but I also have a strong desire to advocate for and support those affected by it.

This year I discovered a new club that consolidated a wide range of efforts supporting and advocating for refugees had been established: Penn Undergraduates for Refugee Empowerment (PURE). The club’s founder and president, Stephen Damianos, C’19, started PURE after unsuccessfully looking for a community service group focused on international refugees at Penn. As a member of this club in the few months that it has been active so far, I have been able to engage in many activities that are helping the refugee cause.

I had the opportunity to volunteer at an event this semester organized by Al-Bustan Seeds of Culture, a local organization dedicated to raising awareness for and promoting Arab culture in the city. The event was a concert featuring prominent Syrian musicians based in the United States, followed by a dinner and conversation for Syrian refugees living in Philadelphia. In addition to helping serve food, I used my ability to speak Arabic to help address some of the questions and concerns that these refugees had about adjusting to life in the United States.

Outside of this style of volunteering, PURE has also fostered relationships with Penn Law, which I am capitalizing on not only to realize my goal of supporting refugees but also to develop my own knowledge and skill set.

Last month, Akbar Hossain, Elizabeth Sahner, Leah Wong, Arhama Rushdi, Kimberly Grambo, and Margaret Kopel (all L’18) put together a “Game Night for Good,” which served as a fundraiser for the Rohingya refugees fleeing persecution in Myanmar. The event was a lot of fun, but it also featured a talk at the beginning from Anne Richards, former Assistant Secretary of State for Population, Refugees, and Migration in the U.S. State Department from 2012 to 2017, who provided a highly informative insider’s perspective into the issue.

In a current ongoing effort, I am now also collaborating with law school students as a part of International Human Rights Advocates (IHRA), a student-run pro bono organization in the Law School. We are working on developing material for and carrying out “Know Your Rights” clinics for refugees in Philadelphia, which will take place in the spring of next year. Despite my lack of a legal education, I am contributing by using my language abilities to translate a variety of materials from English into Arabic, French, Spanish, and Persian, while learning about the relevant, underlying legal frameworks by doing so.

PURE, in addition to facilitating involvement with Penn Law pro bono clinics like IHRA, has procured positions for undergraduates to assist law students in their research. From the selection of Round One Projects that we were recently emailed, I’m starting to work on researching comparative legislation in South America on the right to work of asylum seekers and the various obstacles non-citizens face in looking for jobs. 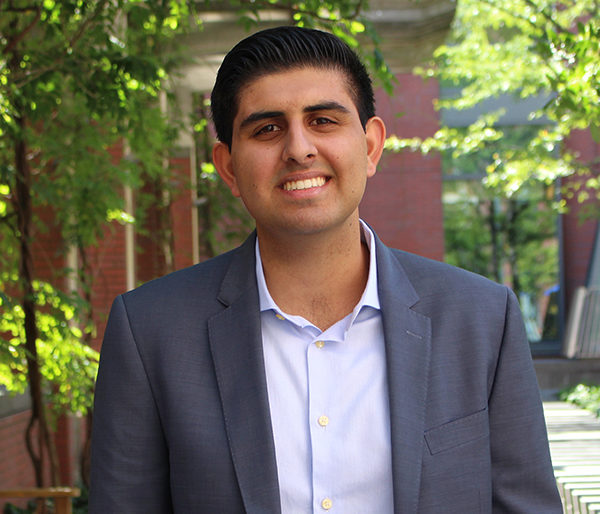 How I’m Applying What I Learn to What I Care About
Coming to the U.S. for my university education has also given me new perspectives on the matter. In my Arabic class last semester, for example, I used the final paper as an opportunity to explore how the Syrian refugee crisis had been covered in Western media.

Outside of the classroom, I try to involve myself in activities dedicated to supporting the refugee populations living in Philadelphia in an effort to make real-world impact myself through initiatives like PURE.

As a member of the Huntsman Program in International Studies and Business, I feel that my experience with PURE complements my undergraduate studies. Since I am also considering applying to law school in the future, my work with Penn Law will serve me well after I graduate.