“Penn is a shockingly supportive place for an adventure like this. The plethora of resources for the whole community is staggering. If they can’t get something directly, the second-degree connections will take care of it. It surprised me in the best way possible.” – Ryan Torres W’25

How are you spending your winter break? For Ryan Torres W’25, winter break is the perfect time of year to embark on one of his extreme endurance expeditions. Already, he’s notable for his run from Locust Walk to Times Square, and the fact he cycled from the East Coast to the West of the United States on nothing more than a second-hand road bike. Just recently, he became the fourth person ever to swim the butterfly stroke from Alcatraz Island to San Francisco’s main harbor.

At the time of this article’s publication, this sophomore is off the grid, where he is ascending the highest volcano in the world – on a bicycle. And it’s all for a great cause: raising funds for World Bicycle Relief, an organization dedicated to increasing bike access for communities struggling with mobility.

Before he departed for the Atacama Desert in South America, Wharton Stories caught up with Ryan, who spoke about balancing athletics and Wharton’s rigorous curriculum; as well as the cause he’s highlighting as part of his expedition.

Tell me a little bit about your childhood and how you got interested in these adventures?

I was born in Barcelona in 2002 and raised in Spain, growing up speaking both Catalan and Spanish. My mother died when I was eleven-years-old; I still have my father, who is a hard-working dentist. I speak four languages. Catalan was my mother’s tongue; Spanish, my father’s tongue.

I learned French because it’s a sister tongue to Catalan, and I learned English because I set my mind to studying in the United States. Because English classes were not present at my school, I consumed American movies and read books en masse; through the utilization of those resources, I taught myself how to speak English with fluency.

As a life-long athlete, I was in high school when I was invited to join Spain’s national team for a sport called the modern pentathlon; a five-discipline event, developed for the elite in 19th-century French. I had to run, shoot, fence, ride horses, and swim; needless to say, it was an intense environment that taught me to push myself.

How are you able to continue combining your intellectual and athletic passions?

I resonate with the Roman principle of “fit body, healthy mind.” In a way, I feel like they’re complementary. In the environment where I was, just because people were very athletically dedicated, there isn’t a divide between intellect and athletics.

For a long time, I knew I wanted to study and build a life in the U.S., so I set my sights on schools with strong programs in economics and finance. Wharton was the ultimate dream; when I received my acceptance, I was over the moon. I packed two suitcases, jumped on a plane, and built a life in the States from zero.

I really enjoy Wharton’s invigorating environment. The students around me are all active, just in general; this collective energy compels my follow-through regarding the many ideas and projects that I have. The University of Pennsylvania, in addition to Wharton, cultivates a mentality of achievement; but when my first semester concluded, I felt like I did not push myself physically, especially given my background in elite athletics.

So, on a whim, I decided to run from Philadelphia to New York. I knew I could finish a marathon, and I knew that I could run fifty miles; but, I didn’t know if I could run a hundred. That’s why I decided to run from Locust Walk to Times Square. I finished my last exam (ECON 10), put a bunch of food in my backpack, and started running up north. That was on a Monday afternoon, and my flight back to Spain for summer break was due to depart on the following Thursday. With that timeframe in mind, I decided a run to New York seemed feasible enough. If I arrived in New York, even just two hours before my flight out of JFK, I was prepared: I had my passport in a Ziploc bag in my backpack.

You ran from Philadelphia to New York and still wanted more. Can you tell us about your journey across America?

As my spring semester concluded, I received an opportunity to work out of a startup in San Francisco for the duration of that summer. For me, the question became: “How can I get there?”

I thought about biking from Philadelphia to Chicago and then flying to San Francisco because, at the time, I didn’t know if I could make it across the country. But I wanted to try. And at the end of the day, I’m a broke college student, so my answer came via a $200 used road bike I purchased off of Craigslist. I bought a train to take it down from Jacksonville to San Diego, the shortest coast-to-coast distance.

Perhaps shockingly, I never learned how to ride a bike before the day came to pick up my Craigslist bike. I fell over about thirty times the first day or so; so embarrassing, but somehow, I made it across the country. It’s the hardest thing I’ve ever done in my life.

How did your journey impact your impression of America before and after that experience?

The best aspect of my trip wasn’t the biking, but meeting people throughout the country. It’s something for which I remain incredibly grateful, even if I got into trouble many times along the way. After all, I was nineteen-years-old, biking on the side of an interstate with minimal preparation.

Many people helped me along the way. I met fishermen in harbors; I met farmers, who allowed me to crash overnight on their respective properties. I met truckers and oilmen. And through it all, I learned about the range of American people. It’s like there are multiple countries in between the coasts.

Tell us about your current biking expedition in South America.

A friend put me in touch with an extreme biker, Alex Tilson. He’s biked from Europe to Asia. He put together a network of bikers; one of whom is Leo Tenenblat, who has biked from Brazil to California, in addition to other impressive achievements. When I told Leo I wanted to do cycle in the mountains, in some place “like the Andes,” Leo leapt at the opportunity, and we decided to team up.

We decided to do Ojos de Salado; a very tall, very sandy volcano. It’s altitude stretches over 22,000 feet, which marks Ojos de Salado as the highest volcano in the world, and the second highest peak in the western hemisphere.

Since the bike will be going on sand and snow, we needed wide tires, so we got fat bikes. These bikes are very niche and manufactured by specialized bike makers. They start at $4,000. We reached out to several manufacturers, and we finally found one willing to lend us the bikes. It’s a prototype bike that will be launched in February of next year. It’s made of aerospace-grade titanium and assembled in the US. It can handle very serious stress and has ultra-wide tires. My bike is the one they used to take stock photos.

We will bike from Chile to Argentina through 500 miles of the Atacama Desert, the world’s driest desert. It’s going to be a mainly self-supported expedition. There will be food and water drop-offs, but we will carry the tents and two days’ worth of food and water restocks. The second part is the expedition to bike up the mountain. It’s 300 miles across the desert to get into the mountain range; then, we’ll ascend the highest volcano before we bike another 200 miles across the rest of the desert.

We want to show what’s possible with a bike: cross deserts, climb mountains. We want to push further the definition of what is possible on a bike. We’re raising awareness for a nonprofit called World Bicycle Relief. They give bikes to communities in which those bikes can help drive social and economic progress. For example, bikes are given to girls in Zambia to help with getting to school. They’re given to farmers in Nigeria to help them get to market with produce. Bikes are a reliable, efficient, and not mechanically complex mode of transportation. We want to showcase what bikes are capable of with this expedition and have teamed up with a nonprofit that does the same on a socioeconomic level.

Where does your Wharton education fall in with this?

One of the biggest things I realized is that Penn is so much more than the classes you take. This is an incredible assortment of people and opportunities. The education you receive at Penn extends well beyond the classroom.

At first, I was struggling to get manufacturers to take my messages seriously, so I reached out to my professor, Shelly O’Donovan, for help drafting my emails to get my message across. Then, I reached out to my marketing professor, Cait Lamberton, who asked me: “Why would a company want to give you $10,000 worth of gear?” She helped me write out an answer to that question. Throughout the negotiations with the nonprofit and with other sponsors, I had to apply the principles I learned in my negotiations class. Finally, I also reached out to  Anne Greenhalgh, who is my boss since I’m a TA for Wharton 101, for help. She connected me with World Bicycle Relief, initially. She connected me with the Chilean adventurer who first climbed the three faces of Everest, Rodrigo Jordan who in turn connected me with local guides who would do the food and water drop-offs.

Penn is a shockingly supportive place for an adventure like this. The plethora of resources that the whole community can tap into is staggering. If they can’t get something directly, the second-degree connections will take care of it. It surprised me in the best way possible.

You can donate to World Bicycle Relief and support Ryan’s cause here. 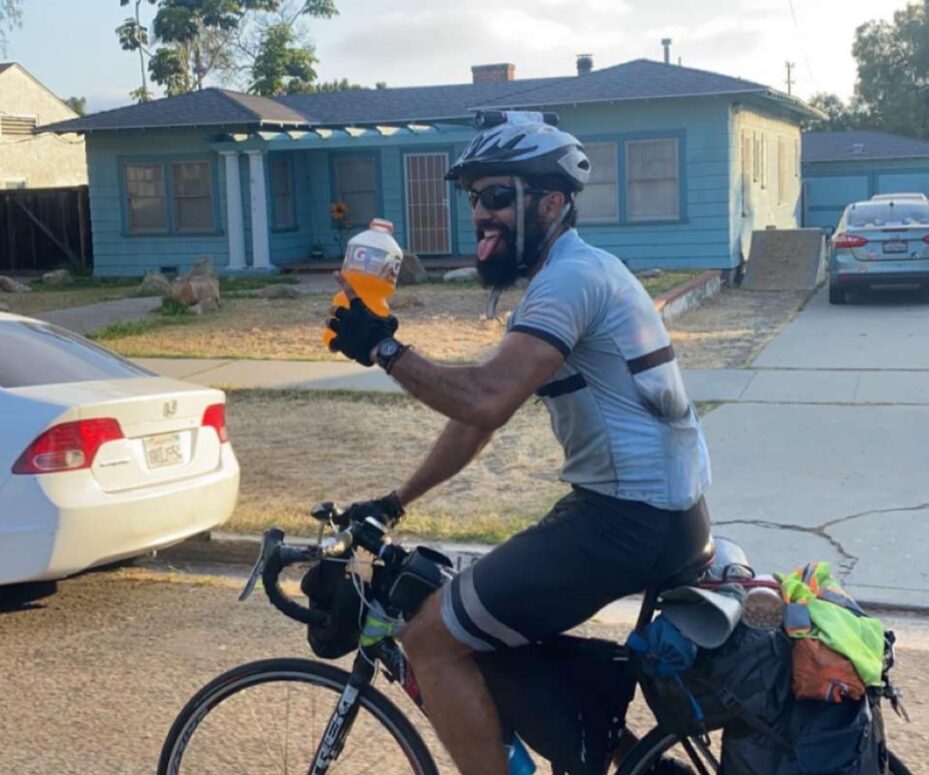